Tips for traveling the roads & highways in Myrtle Beach

If you’ve never visited the beach before, it can seem a bit daunting to travel around the 60 miles of beaches known as The Grand Strand, but in fact getting around Myrtle Beach is quite easy.

Thanks in part to the numbered avenues, and only a few major highways which run the length of the beach, getting the hang of things and getting to your accommodations is not as hard as it looks.

The key for most visitors is to finding the main connector roads for the area where you’re staying and then to do your best to avoid any major bottlenecks, as traffic can get quite congested in spots during the high season.

The additions of new State Routes in recent years along with improvements in connectivity to the existing roads have made it more convenient than ever to get to, from and around the Grand Strand.

With the Atlantic Ocean serving as a barrier to the east, the best way to think of the Myrtle Beach area’s highway system as a tic-tac-toe board, with three main thoroughfares running north-south and three running east-west. This road runs directly through the heart of the Grand Strand, from the N.C. state line to Georgetown. Nicknamed Kings Highway, the road can get congested during the summer months, especially near Restaurant Row and The Market Common. New connections to U.S. 17 Bypass, S.C. 31 and S.C. 22 have made it easier to avoid long stretches on Kings Highway.

Running from the north end of Myrtle Beach south to Murrells Inlet, this road was designed to alleviate traffic from Kings Highway. Due to the rapid development of the Myrtle Beach area The Bypass is now developed to the point that it too can get thick with traffic so many use S.C. 31 instead. Business 17 runs closer to the ocean and includes more businesses and stoplights. The Bypass, which is less of a bypass that it was conceived to be, skips some of those lights and can allow for quicker travel.

For those visitors traveling a long stretch of the Grand Strand, U.S. 31 (aka Carolina Bays Parkway) is a helpful path.  This is a 65-mph highway that runs from S.C. 9 in Little River to S.C. 544 in Socastee. Unlike U.S. 17 Bypass, which has become cluttered with businesses and stop lights, S.C. 31 is red-light free and serves as the true bypass for travelers who need to make their way more than a few miles north or south. Construction that’s currently in progress will eventually extend the route all the way to S.C. 707 in Murrells Inlet, allowing visitors to turn a long drive on U.S.17 into a 20-minute sprint on S.C. 31.

The traditional route to the beach that longtime visitors may remember sitting in traffic anxiously awaiting their arrival to the beach. While it’s still the most direct path to Myrtle Beach, there are a growing number of intersections, stoplights and bottlenecks near the beach that can cause frustration during the busy summer months. Luckily, there are a number new alternatives, especially for guests staying on the far north or or far south ends of the Grand Strand.

S.C. 22 is a great way for visitors to get to the northern part of the Grand Strand, including North Myrtle Beach, Cherry Grove and Little River. Also known as Veterans Highway — or the “Conway Bypass” to locals — this road is a 65-mph, multi-lane expressway that allows visitors to cut down on the amount of time spent on the oft-congested U.S. 501 as they enter the Myrtle Beach area. The road breaks off from U.S. 501 in Aynor, S.C. and offers a smooth 32-mile trip to the coast, passing S.C. 31 and connecting to U.S. 17 in the Restaurant Row area near Tanger Outlets.

This state highway runs from Conway, near Coastal Carolina University, to the Surfside Beach area, ending at U.S. 17 Business near a trio of campgrounds — Pirateland, Ocean Lakes and Lakewood. In recent years S.C. 544 has been widened to allow faster access to the Surfside Beach area and the south end of town. The extension of S.C. 31 has made it easier and quicker to commute between the North Strand to the South Strand.

Knowing the main highways is an important first step, but to become a seasoned Myrtle Beach visitor it’s best to get to know some of the area’s key connector and cut-through roads. Here’s a look at some of the most prominent roads that will help you avoid congestion during the tourism high season and deliver you to your destination in short order: One other north-south route to consider is Robert M. Grissom Parkway. It runs from the Myrtle Beach International Airport north past 48th Avenue before crossing over the Intracoastal Waterway. This can be a useful route for traveling north-south within the Myrtle Beach city limits. It runs between U.S. 17 Business and the bypass and passes the Coastal Grand Myrtle Beach Mall as well as the Broadway at the Beach shopping complex.

This four-lane through road connects U.S. 501 to Kings Highway by running directly in front of Myrtle Beach International Airport. It starts as George Bishop Parkway and runs past the former Hard Rock Park, before turning into Harrelson Boulevard as it crosses the Intracoastal Waterway. The road, formerly known as Jetport Road, served as an entrance to the airport for many years, but was extended to Kings Highway in 2012. It now provides a great shortcut to Ocean Boulevard for visitors staying on the south side of Myrtle Beach.

Starting from its newly-renovated, $121 million intersection with U.S. 17 Bypass — an area known locally as “The Back Gate” — this road provides visitors a connection to the south end of the beach and serves as a main artery through Socastee and Murrells Inlet. Farrow Parkway is a four-lane road that runs 3.5 miles between U.S. 17 Bypass and U.S. 17 Business, passing by a number of popular attractions including The Market Common shopping complex, Grand Park and the Warbird Park veterans memorial. On the opposite side, S.C. 707 (aka Socastee Boulevard) is a four-lane road that runs through the heart of the mainly-residential Socastee area of Myrtle Beach and connects on its south end back to U.S. 17 in Murrells Inlet.

Starting in rural Horry County at S.C. 90, this road runs through the heart of downtown North Myrtle Beach and serves as a convenient way for visitors to access North Myrtle Beach from S.C. 31. Formerly known as the Main Street Connector, this four-lane connector highway gives visitors access to the new North Myrtle Beach Sports & Recreation Complex on its west side and on its east side crosses over the Intracoastal Waterway before turning into Main Street at its intersection with U.S. 17. From that point on, Main Street North Myrtle Beach plays home to a number of tourist-friendly shops, restaurants, clubs before dead ending into Ocean Boulevard at the famed “Horseshoe” area which hosts many concerts and events.

This road provides visitors a sneaky cut through to get from U.S. 17 Bypass to Surfside Beach. Also known as Holmestown Road (on the S.C. 707 side), this road is currently only two lanes wide, however a $46.3 million, three-year expansion will begin in 2015 to widen it to five lanes near U.S. 17 Bypass and three lanes near U.S. 17 Business. Upon crossing U.S. 17 Business, the road turns into Surfside Drive and plays home to a pair of parks, and a few businesses before dead ending into the parking lot for the Surfside Pier.

Another cut through from U.S. 17 Bypass is the Garden City Connector, a short stretch which lands visitors on U.S. 17 Business smack dab in between of the main roads for reaching the Garden City Beach area — Pine Avenue and Atlantic Avenue.

This off-the-beaten-path state route is a sneaky way for visitors traveling from the airport to get straight to downtown Myrtle Beach. While it admitted doesn’t offer the most scenic views of our area, once turning to Broadway Street near downtown it does give you a glimpse of “classic” Myrtle Beach. It runs about two miles between Harrelson Boulevard and U.S. 501, and provides beach access by intersecting with 17th Avenue South and 3rd Avenue South along the way.

These two-lane roads run perpendicular through the north end of Myrtle Beach, allowing visitors to travel to and from the Restaurant Row area. Connecting on both ends to U.S. 17, the road provides access to areas including Apache Pier/Campground, Myrtle Beach Travel Park and Kingston Plantation, as well as attractions like Tanger Outlets, Azealia Shores Golf Club and the Galleria shopping center.

As the longest State Highway in South Carolina, S.C. 9 runs more than 250 miles from the North Carolina state border north of Spartanburg, all the way to the Cherry Grove area of North Myrtle Beach. For those looking to avoid the congestion of U.S. 501 and deterred by two-lane rural roads, S.C. 9 offers an alternative route to the north end of the Grand Strand, running from U.S. 95 through Dillion, Nichols and Longs before turning into Sea Mountain Highway near its intersection with S.C. 31. If you follow Sea Mountain Highway into Cherry Grove you’ll find a number of beachy businesses including restaurants, miniature golf, and shopping centers — before running into the Cherry Grove Fishing Pier at the beach. Pay for 5 nights and get 2 free! Plus, enjoy access to the seasonal H2OASIS Waterpark included with your stay! Open for the 2023 season from March 16 through October 22, 2023. Enjoy three giant waterslides, kids splash area and more! Hurry, book now! 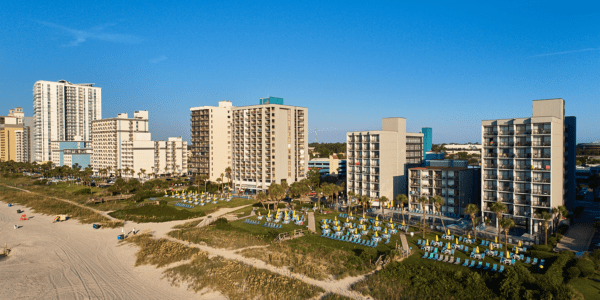 SAVE 25% on your accommodations and receive 2 FREE Starbucks® daily! PLUS, with our Brittain Rewards program, guests can enjoy FREE or discounted admission to local attractions such as Broadway Grand Prix, Myrtle Beach SkyWheel, Wonderworks, and more. 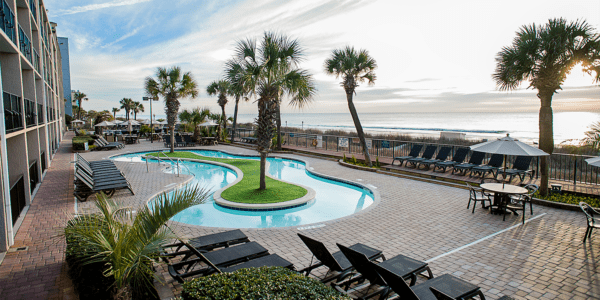 SAVE 25% on your accommodations! SAVE 25% on your accommodations, receive a $15 Food & Beverage Credit Daily, and FREE Breakfast Daily. PLUS, with our Brittain Rewards program, guests can enjoy FREE or discounted admission to local attractions such as Broadway Grand Prix, Myrtle Beach SkyWheel, Wonderworks, and more.

One grand prize winner will receive a 3-Night Stay at an Oceanfront Myrtle Beach resort Plus an Amazing Prize Pack!